By Wolveraider
7/19/2017 12:54 pm
Breaking News......Jerry Mcdonald has reported from Oakland Raiders training camp in Santa Rosa, California that the entire scouting department has been fired after a dismal showing at camp....the Head of the Scouting department was heard shouting something about "low volatility" as he was dragged out of the El Rancho Tropicana Hotel.

Overall the numbers were pretty ugly, but the top ten picks yielded 5 players in the minus, 3 at 0 and only 2 in the positive.

GM Al Davis has apparently decided to hold the scouts responsible for the poor showing and not the coaching staff.

Liked by Campton, jgcruz, Kuder51 and 3 others

Apparently GM Al Davis has made the unprecedented move of trying to obtain an order to make the air over the Raiders practice field a no fly zone.

This comes on the heels of a small plane that was seen flying around the area the previous day. The plane was pulling a banner that read "Bernie's big rock bottom car deals"....but GM Al Davis insists he could see the copilot viewing the practice through binoculars.

All media and non-football personnel have been banned from practice.

When asked about the incident, Al Davis replied " It's those Chiefs...you can't trust them, pretty sure I saw GM/Owner setheric himself going through my garbage the other morning, dirty Chiefs will do anything to try and get the upperhand....but the Raidahs will prevail."

Both teams are 3-0....but the Raiders have barely scraped by....meanwhile the favored Chiefs come to town having scored 173 points in those wins....the Raiders will be hard pressed to slow down the Chiefs high octane offense.

Both team's come into the game with injuries to highly rated players.

By Wolveraider
8/07/2017 2:11 pm
After the crushing defeat at the hands of the hated Chiefs.... Al Davis was on hand for a quick comment before going in to address the team.

"The Raidahs are as proud in defeat as we are in victory....you cannot tarnish the silver and black with a single blow....we will be back in the fight and those foes we face must go down and go down hard."


On a sidenote: Ted "the mad stork" Hendricks was seen drinking a 12 pack of Coors and riding a horse around the Oakland A's infield just minutes before their game was to begin.
Last edited at 8/07/2017 8:09 pm
Liked by Pernbronze, Beercloud

He then gave a gracious wave to the Coliseum fans left in the stands.
Liked by Pernbronze, Wolveraider

Al Davis was on hand for a quick comment before going in to address the team.

"The Raidahs are as proud in defeat as we are in victory....you cannot tarnish the silver and black with two blows....we will be back in the fight and those foes we face must go down and go down hard."


Al Davis was on hand for a quick comment before going in to address the team.

"The Raidahs are as proud in defeat as we are in victory....you cannot tarnish the silver and black with three blows....we will be back in the fight and those foes we face must go down and go down hard."

In an ugly game that saw the Chargers fumble the ball 7 times and lose 6 of them....rumors are circulating that that there may have been a foreign substance on the balls that caused them to be more slippery than usual.

When GM Al Davis was asked about it....he commented, "The Raiders had their fair share of fumbles in the game as well, but if a situation arises that can be taken advantage of, well....it's all about trying to gain a victory."

QB Ken Stabler suffered a foot injury and is questionable for the Jacksonville game.

We caught up with Stabler (drinking a cold can of Lucky lager) as he was exiting the facility.

Stabler, are you concerned about your offensive line after they gave up 15 sacks in this last game?

"No, those guys up front are playing their asses off....we'll figure it out"

But....that's 36 sacks this year already, you must be a little concerned about the guys in front of you?

"Ya'll need to back off those comments, it's a team game, I could get rid of the ball a bit quicker myself"

But right tackle Fletcher has allowed 8 sacks himself....what do you think of....

(At this point Stabler threw his beer on the ground and let loose with a litany of expletives that are not suitable for print....we'll just print the picture) 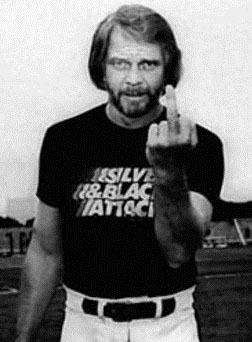